According to data provided by Hillsborough County Public Schools (HCPS) only 12% of focus group participants were parents. The data also indicates 17% of participants were students, and a whopping 71% were employees. While employees may be stakeholders, they may not necessarily be end users of the public schools. Students may not always know what is in their best interests, and the younger students might not understand the proposal or its implications. Parents know what is best for their children; more parents should have been included. 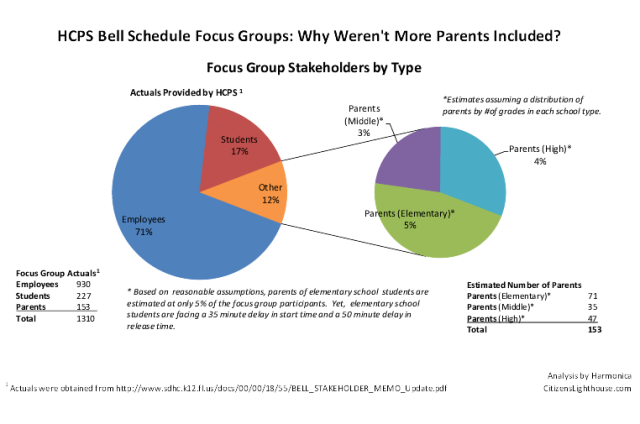 See here for a larger graphic of the HCPS Focus Group Analysis.

Based on a reasonable assumption about the distribution of parents by school type (i.e. elementary, middle, and high) one might conclude as little as 5% of focus group participants were elementary school parents.  Information about the actual distribution of parents by school type (from the focus groups) has been requested twice from HCPS, but has not been provided.  The assumptions are shown here:

After transportation and pickup related congestion, many elementary students might not arrive home until 3:25 pm.  Getting home later has an impact on after-school activities, downtime, playtime, and homework time for young children.  Those already tired at the current 2:15 pm release times will have even less time and likely less energy for development of their interests.  After-school hours are a window of opportunity for children to nurture their individual passions that may stick with them for a lifetime. Lastly, students will lose precious morning hours when they are fresh and rested.  Many students may now be spending those hours in childcare due to the later start time.  The focus group should have placed more weight on the proportion of parents included since these and many more concerns would have had a better opportunity to be voiced.

High school students will start at 7:15 am and be released at 2:10 pm according to the proposed bell schedule, a decrease of 32 minutes everyday at school.

Middle School will start 15 minutes later than the current schedule, beginning the day at 9:15 am.  Their release time remains the same at 4:15 pm, resulting in a loss of 15 minutes daily in school.